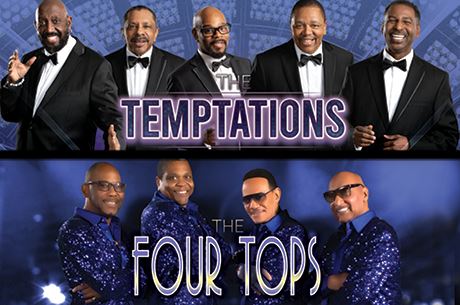 The Temptations are notable for their success with Motown Records during the 60's and 70's and have sold 10's of millions of albums, making them one of the most successful groups in music history!

For over 40 years The Temptations have prospered, with an avalanche of smash hits, and sold-out performances throughout the world.  This group had 37, Top 40 hits to their credit, including 15 Top 10 hits, 15 No. 1 singles, and 17 No. 1 albums spanning from the mid- 1960's to the late 80's in addition to the quartet which soared to No. 1 on the R&B charts.  Song titles alone summon memories beyond measure to include; "The Way You Do The Things You Do," "My Girl," Ain't Too Proud To Beg," "I Wish It Would Rain," and "I Can't Get Next To You," to name a few.

The Temptations were inducted into the Rock & Roll Hall of Fame in 1989.

The Four Tops are among a number of groups who established the Motown Sound heard around the world during the 1960's.  Their first Motown hit, "Baby I Need Your Lovin'" in 1964, made them stars and their sixties track record on the label is indispensable to any retrospective for the decade.  Their No. 1 hit songs include "I Can't Help Myself (Sugar Pie, Honey Bunch)," and "It's The Same Old Song."   Their commercial peak was highlighted by a romantic trilogy; the No. 1 hit "Reach Out I'll Be There," and "Standing In The Shadows Of Love".  They are one of the few groups to have hits in three consecutive decades.

*This event is a rescheduled date from the original performance slated for February 3, 2022. Ticket holders should retain all tickets to the original date - event tickets and member reception tickets - these will be valid for the new date.  Click here for additional information for ticket holders.

Buy Tickets
What You Should KNOW BEFORE YOU GO